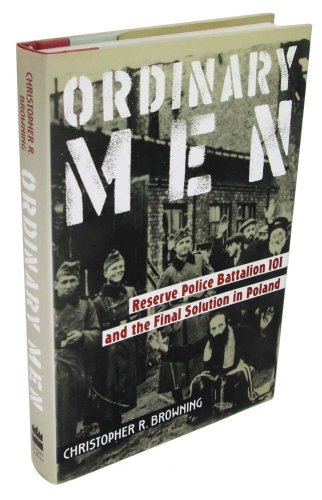 On June 13, 1942, the commanding officer of Reserve Police Battalion 101 received orders to round up the Jews in the Polish town of Josefow and shoot all but the able-bodied males. Major Wilhelm Trapp, who wept over the order, gave his troops the extraordinary option of ``excusing themselves'' from the task. Of the 500 in the unit only a dozen did so, and the rest slaughtered 1500 women, children and old people. Thus began the career of one of Nazi Germany's most efficient extermination units. Drawing on postwar interrogations of former Battalion members, Browning reconstructs the 16-month period from the Jozefow massacre to the Battalion's participation in the brutal ``Fall Harvest Jew Hunt'' in November 1943, during which these ordinary men, mostly middle-aged working-class people from Hamburg, shot to death some 38,000 Polish Jews and sent 45,000 others to the Treblinka gas chambers. In the vast Holocaust literature, this short work stands out with breathtaking impact, for it reveals how average Germans became mass murderers. ``If the men of Reserve Police Battalion 101 could become killers under such circumstances,'' asks the author, ``what group of men cannot?'' Browning is a history professor at Pacific Lutheran University in Tacoma, Wash. Photos. (Mar.)
close
Details