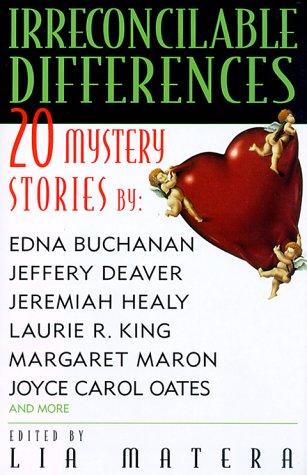 Although this anthology contains 20 original short stories, most of which are very good, it's worth the asking price just for Joyce Carol Oates's entry, ""Tusk."" There, a teenage boy, whose home life is tormented, brings a knife to school; as the day passes, his anger builds toward a terrible climax. Other especially noteworthy tales come from Laurie King, Bill Pronzini, Marcia Muller, Edna Buchanan, Jeffery Deaver, Jan Burke, Amanda Cross and Gillian Roberts. King's story of a paleta man, an ice cream vendor who walks the streets of a barrio neighborhood and knows the secrets of its inhabitants, is masterly. Burke, meanwhile, evokes the spirit of Georgette Heyer's Regency novels in her vibrant tale of murderous goings-on at a 19th-century stately home. Editors and readers who are tired of the current proliferation of memoirs may applaud ""The Perfect Revenge"" that occurs in Cross's story. Pronzini, an expert at concise but suspenseful stories, tells the riveting tale of a husband and wife who keep escalating their quarrels during a series of hot summer nights. On the lighter side, former trauma nurse Eileen Dreyer has some farcical ""Fun with Forensics."" Despite the title, no story here is a conventional tale of divorce or domestic argument. Instead, here are satisfyingly twisted plots based on the differences that can spark violence between spouses, neighbors, partners and even old friends. (Dec.)
close
Details