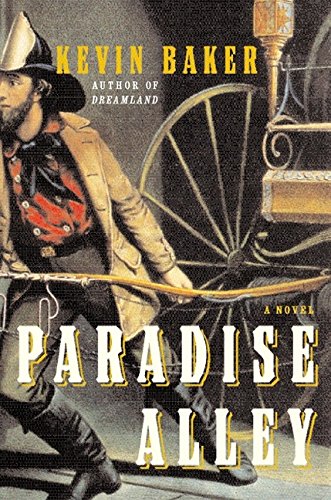 In his second New York novel (after ), Baker takes a grisly event—the 1863 Civil War draft riots—and crafts a terrifying, human story bursting with all the calamity, brutality and power of the riots themselves, which may have been the worst civic disturbance in U.S. history. Baker, an writer, bases his work largely on historic events—Lincoln's announcement of the draft law did in fact propel thousands of New Yorkers, mainly Irish, to burn and loot the city and murder hundreds of innocents. The book follows the difficult lives of Ruth, Deirdre and Maddy, three women living on Paradise Alley, a dingy Lower East Side passageway, during the five days of riots. Each chapter alternates among many voices, however; in addition to the women, Baker speaks through a New York reporter, an escaped slave, an immigrant boxer turned criminal, an army private, a volunteer fireman and other characters. The formula works brilliantly, giving Baker the opportunity to flash back to Ruth's survival of the Irish potato famine; the voyage she and so many Irish made from their ravaged country to America; and her future husband's journey from slavery in Charleston, S.C., to freedom in New Jersey. The combination of momentous events, tellingly real aspects of lower-class 19th-century life, and raw emotions like fear and pride make this a viscerally affecting story. Baker intertwines love, violence, history, adventure and social commentary to give readers an invigorating, heartbreaking tale of the immigrant experience.