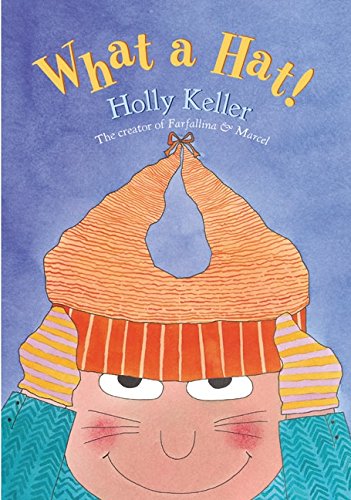 Keller's ( ) satisfying story introduces Henry and Wizzie, young rabbit siblings whose cousin Newton comes to visit. When Mama asks Henry to take Newton's hat and coat, the visitor refuses to relinquish the former, a striped, double-pronged, stocking cap, firmly declaring, "No hat." After eating, bathing and sleeping in his hat, the otherwise silent Newton once again says "No hat," when frisky Henry (who "thought Newton was being weird") snatches the cap from his cousin's head. Wizzie comes to Newton's rescue, retrieving the hat and returning it to him. Later, when a bully bunny knocks down the sand house that Wizzie and Newton made, and Wizzie can't stop crying, her cousin comes to rescue, offering his beloved hat to her in consolation. Clearly comforted by the chapeau, Wizzie wears it to bed that night, after which Newton happily points to his hatless head and puts a new spin on his only utterance, announcing to Henry, "No hat." Keller's understated narrative and appealingly simple, wry watercolor-and-black-line illustrations impart significant humor and teach several lessons, including the importance of respecting a peer's quirks, sharing, being a good friend and—when the time is right—having the confidence to shed one's security "blanket." Vital messages, playfully delivered. Ages 4-up.