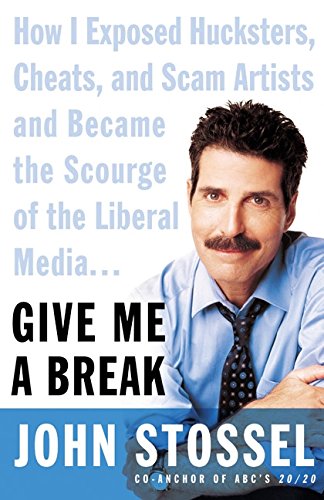 GIVE ME A BREAK: How I Exposed Hucksters, Cheats, and Scam Artists and Became the Scourge of the Liberal Media...

Stossel doesn't offer much detail about how he became "the first of the in-your-face TV consumer reporters," rushing through his career's start and then shifting to anecdotes from his experiences to illustrate how he reached the ideological conclusions that have given him a reputation as a rogue, a tag he both embraces and tries to shake here. Free markets are great, the correspondent repeatedly tells readers, while government regulation stifles innovation and keeps consumers from gaining access to the best, safest products possible. Stossel calls out the federal government in particular, citing its "incompetence" and comparing the FDA to a "malignant tumor" (he also claims September 11 happened because "the FAA for tighter security"). While Stossel describes himself as a libertarian, his comments on the liberal media establishment are reminiscent of those of outspoken conservative Bernard Goldberg. Many readers who nod in agreement when Stossel complains about the "totalitarian left," however, may find it harder to share his enthusiasm for extending personal liberty to include assisted suicide, legalized prostitution and dwarf-tossing. Stossel may be effective in small doses on , but his rhetorical strength diminishes when the print format requires him to go on at length. 16-page b&w photo insert not seen by .