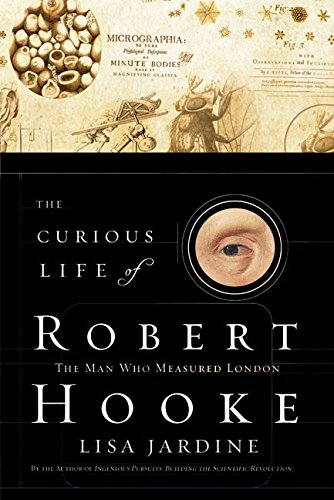 THE CURIOUS LIFE OF ROBERT HOOKE: The Man Who Measured London

English scientist Robert Hooke (1635–1703) is known to history more for losing quarrels with better-known scientists than for his achievements. He dared challenge Newton for credit as discoverer of the inverse-square law of gravitational attraction and lost. In his dispute with Dutch scientist Christaan Huygens over who invented the isochronous pendulum clock, Hooke fared slightly better, since it was discovered that unfriendly members of the fledging Royal Society were slipping word of his discoveries to Huygens. Cambridge Renaissance scholar Jardine follows up her 2002 biography of Christopher Wren with this satisfying rehabilitation of Hooke, Wren's colleague in rebuilding London after the devastating fire of 1666. Jardine argues that Hooke played an equal role in many of the projects attributed to Wren, most notably the dome of Saint Paul's and the Monument to the Fire of London. Hooke never made the leap into greatness by adequately working out and proving his "hunches," in large part because of other scientists' demands on his time. As a young man, he was Robert Boyle's trusted assistant. At the Royal Society, which he helped found, he served as curator of experiments and secretary. After the fire he was forced to juggle society members' increasingly unreasonable demands with his work as surveyor and associate to Wren. Hooke grew ill-tempered in his later years and was finally removed from his Royal Society posts. Jardine convincingly attributes his physical deterioration to decades of self-medicating and overwork. Sure to become the standard life of Hooke, Jardine's sympathetic study will please readers interested in the early years of modern science and scientific biographies. Illus.