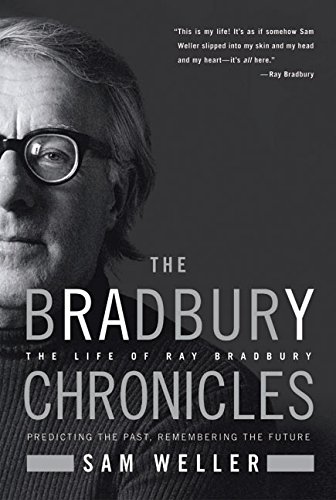 THE BRADBURY CHRONICLES: The Life of Ray Bradbury

Journalist Weller pays tribute to an American icon in this ebullient authorized biography of Ray Bradbury, author of and , who was born in Waukegan, Ill., on August 22, 1920. ("I remember the day I was born," Bradbury claims in what is perhaps a sign of his genius—or of the price of access to him.) In highly readable prose, Weller surveys Bradbury's ancestors and family, his boyhood move to Hollywood, his introduction to science fiction and fantasy and his early writing attempts, which reflect the themes that pervade his more mature work: "nostalgia, loneliness, lost love, and death." If Weller places Bradbury in a pantheon occupied by Shakespeare, Melville, Dickens and Poe, he also mentions more than one extramarital affair and his hero's poor eating habits. Highlights include Bradbury's collaboration with John Huston on the film , his receiving the National Book Foundation's Medal for Distinguished Contribution to American Letters in 2000 and his recent feud with Michael Moore over the title of Moore's documentary film . A serious critical biography will have to wait until after the master's death, but for now this adoring portrait will satisfy most Bradbury fans.