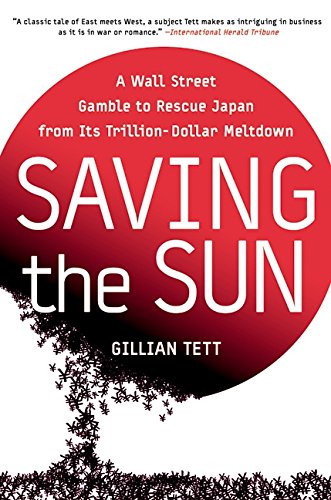 SAVING THE SUN: A Wall Street Gamble to Rescue Japan from Its Trillion-Dollar Meltdown

Financial journalist Tett asks why the economic engine that achieved phenomenal growth for Japan between 1953 and 1970 has been stalled since 1990, with 2003 marking the fifth consecutive year of deflation. Puzzled by the persistent stagnation and dissatisfied with prevailing macroeconomic explanations, Tett has taken an intriguing alternate route to investigate what has gone wrong: she focuses on the history of the Long Term Credit Bank (LTCB) as it evolved from financing industrial customers during the boom years to expanding its portfolio with real estate loans in the 1980s and recent attempts to reinvent itself as Shinsei Bank after being purchased by a U.S. consortium in 2000. The twists and turns of the fascinating LTCB saga are cultural and political eye-openers, but Tett also thinks that the problems she found in the bank are symptomatic of Japan's economy as a whole. She argues that one consequence of Japan's reliance on old ways of doing business was the proliferation of nonperforming loans, burdening the banking system to the tune of more than a trillion dollars in the 1990s; she sees the meltdown of the LTCB and the need to put it up for sale as an inevitable result of failure to get tough with rafts of deadbeat borrowers. When the determinedly entrepreneurial U.S. consortium took over the LTCB with a vision of transforming it into a viable commercial bank, it soon discovered a vast number of hidden bad loans along with unexpected resistance to the consortium's new business strategies. Her candid assessment in this lively volume is certain to stir debate since she points an accusatory finger at what she characterizes as paralyzing traditions of consensus thinking, harmony, hierarchy, insularity and resistance to change, especially if the proposed changes originate with non-Japanese. Illus. not seen by .