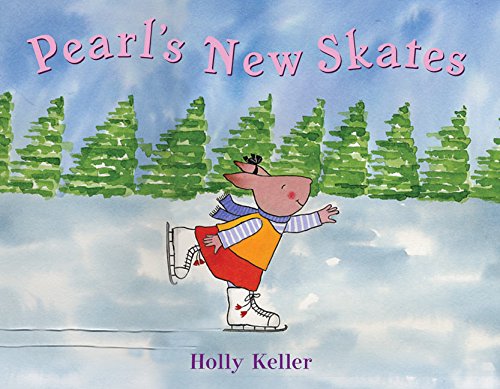 In this cunning caper, Keller ( ) introduces a humorously headstrong young rabbit who receives a pair of ice skates for her birthday. "They're real ones... not double runners," Pearl proudly announces to her grandmother on the phone. Grandma makes her a red skating skirt, in which a barefoot Pearl "twirl[s] on her toes and jump[s] in the air," imagining she is "gliding backward and forward, like a ballerina on the ice." Keller uses these spot illustrations to win readers over to Pearl's charms. So when Pearl heads to the frozen pond, looks with disdain at her friend's double runners and shrugs off her uncle's offer to give her a hand on the ice ("I don't need any help"), youngsters will recognize her bravery as mere veneer. They will surely giggle at Pearl's panicked expression as she tumbles onto the ice, unable to stand up on her skates. Her shrewd uncle mentions that he likes to skate early in the morning, before anyone else arrives, and invites Pearl to come along; "I might not stay very long," she replies. But with the patient fellow's encouragement—and some practice on her part—Pearl learns to glide on the ice. Rendered in watercolors and black line, Keller's spry, spare illustrations follow the heroine's transformation from haughty to humble, comically chronicled in her changeable facial expressions. (The heroine also reconciles with her double-runner pal.) A useful message, clearly and cleverly delivered. Ages 4-up.