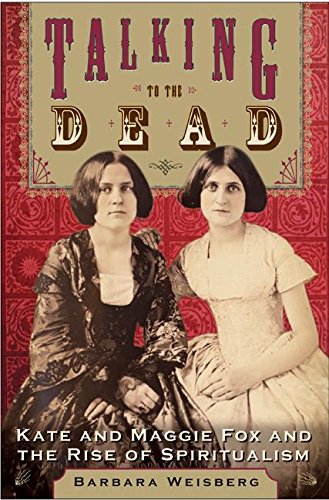 TALKING TO THE DEAD: Kate and Maggie Fox and the Rise of Spiritualism

When the Fox family moved to Hydesville, N.Y., in 1848, they were confronted with strange and unexplainable noises coming from their bedroom. After an evening of listening to these raps and knocks on the walls, the Foxes' youngest children, Maggie and Kate, discovered that they had a gift for communicating with the spirits that made the sounds—when one of the girls knocked on the wall, the spirits would knock back. In her engaging study, Weisberg, a former documentary filmmaker, sets the case of the Fox sisters into the context of a 19th-century America that was developing a fascination with the world of spirits and the paranormal. The two Fox sisters began making public appearances in which they would talk to ghosts; along with their older sister, Leah, they eventually developed a traveling psychic show that took them across America and to Europe, leading tens of thousands of Americans to attend séances. While many clerics accused them of working for the devil, they cultivated a huge following, who, Weisberg says, needed to allay the anxieties of the modern age. In 1888, however, Maggie announced that the sisters had been engaged in deceptive practices. Her announcement shook the world of spiritualists. Although Maggie recanted one year later, the question had been raised: do spiritualists really speak to the dead? Weisberg refuses to judge the Fox sisters, saying only that it's plausible that they were deceptive, in this lively tale of a little-known slice of American history.