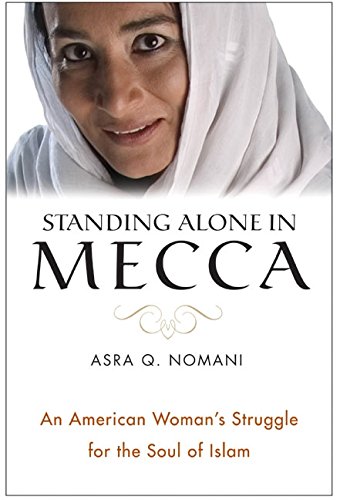 STANDING ALONE IN MECCA: An American Woman's Pilgrimage into the Heart of Islam

A former reporter, Nomani has invented her own nonfiction genre: gender-sensitive Muslim travel writing. An excellent companion to Nomani's first book, , this memoir treads similar ground, chronicling her pilgrimage to Mecca, or hajj, in 2003. Throughout the book, Nomani is filled with self-doubt and healthy frustration with her Islamic faith. The portions describing hajj, particularly the other pilgrims' warmth to her infant son, are original and enjoyable. But the book also points to the incongruity of how the same Muslim community—or —can condemn Nomani for having her son out of wedlock, in a clear case of extramarital sex. The second half of the book records Nomani's pioneering struggle at her mosque for equal treatment of women. Daring to enter the men's door at the mosque, Nomani is repeatedly ostracized, and her father—a founder of the mosque—vilified by his counterparts. Nomani decries the Wahhabi takeover of American mosques and demands reform—a call that will resonate with the average American Muslim. The stories of her preteen niece and nephew introduce readers to a new generation of Muslims who are American and equality-minded. Through memorable personal narrative, Nomani gently instructs readers about modern Islam and her role as a woman within it.