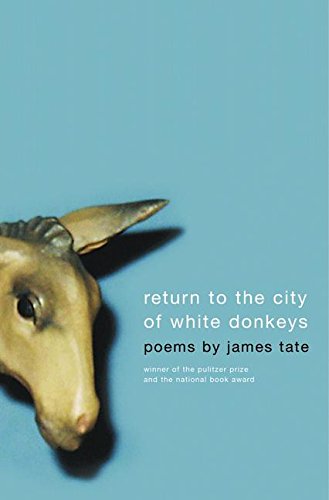 RETURN TO THE CITY OF WHITE DONKEYS

Tate's influence on younger American poets (both as writer and mentor) stands near its apex, but this 14th book of his own poems presents the genial master at less than his best. Tate won the Yale Younger Poets prize for his strong, sad, lyrical debut, , but earned fame in the 1970s and '80s for bitter humor and homey pomo pastiche, set in a prosey free verse where the linebreaks can seem as arbitrary as the situations in which his speaker finds himself. The poems reflect jaded amusement, hope and occasional despair as the poet makes his way through a dangerous world, "contemplating the/ life of the postmodern buffalo" or "the public aspect of breast exposure," pursuing the resurrection of Eleanor Roosevelt, "holding this really exemplary radish," or watching "masked men with titanium pincers slide/ silently through the blackened halls." With few formal challenges, but with plenty of jokes, the poems can recall the comedian Steven Wright, or the pages . If their sheer quantity can make them seem formulaic, Tate's twisted scenarios provoke and amuse as much as they ever did; though they may tire longtime followers, these poems could find new admirers among people who don't often read poets at all.