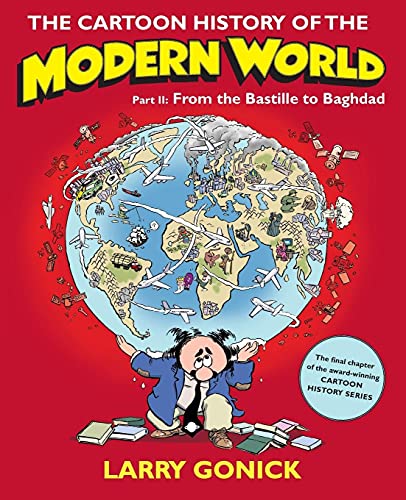 The Cartoon History of the Modern World, Part II: From the Bastille to Baghdad

The final installment of Gonick's deeply funny and impeccably researched series has finally arrived, and like the rest of his Cartoon History series, the book covers a wide range of key and fascinating historical events and topics that have managed to slip through the gaps of common knowledge. The section linking the slave trade, the Haitian revolution and the Napoleonic Wars is particularly good, as are the segments on the modern history of Japan and China. Brilliantly funny, the series finds the inherent humor in history rather than pasting on irrelevant jokes. This is the most politicized book in the series, a jarring but perhaps unavoidable element, since it covers an era ending when Gonick sent the proofs to his publisher. Also, the pacing is odd and frequently rushed—it seems to need an extra hundred pages. Possibly as a result, the book has some interesting gaps. Most notably, aside from the occasional snide remark or allusion, the entire pre-Vietnam history of the United States is completely left out. While Gonick has covered these topics in depth in other books (the stand-alone ) and perhaps tired of them, the absence is glaring.