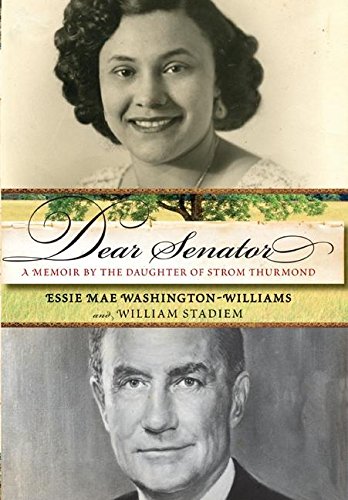 DEAR SENATOR: A Memoir by the Daughter of Strom Thurmond

"Every girls wants her daddy," says the recently revealed daughter of an affair between 23-year-old Strom Thurmond and the family's 15-year-old black maid, "and I wanted mine." In this surprising and sometimes poignant memoir, Washington-Williams reveals how, when she was 16, she learned that her real father was "a handsome, charming, and rich white lawyer." Washington-Williams was raised by an aunt; her biological mother, who died at 38 in a hospital's poverty ward, rarely appears. But Washington-Williams fashions her a kind of love story: "I knew [Thurmond] loved my mother. I believed he loved me, after his fashion." His fashion, as he lives out his political career—governor, presidential candidate, senator—involves surreptitious visits marked by vacuous advice and extravagant gifts. Much that others might have found bitter is given a rosy spin: as a great-aunt remembers slavery, "The massahs all looked after their children, no matter who birthed them." As Washington-Williams has it, Robert E. Lee was a "great American" and "Strom Thurmond turned out to be right about a lot of things, though segregation wasn't one of them." Washington-Williams asserts, "I am every bit as white as I am black, and it is my full intention to drink the nectar of both goblets," and notes that she has sought to join the United Daughters of the Confederacy. Readers are left to sort out the contradictions for themselves. Photos.