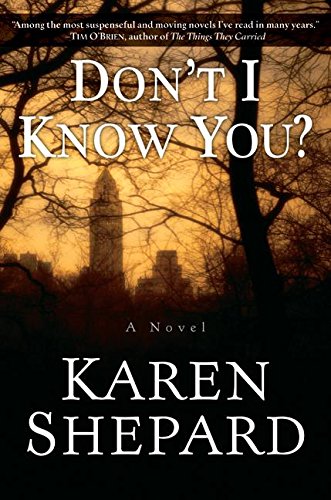 Don't I Know You?

Shepard's masterful third book opens in 1976 on Manhattan's Upper West Side as 12-year-old Steven Engel comes home to find his mom, Gina, stabbed to death. The story is divided into three parts, each giving us a different angle on the crime: first from Steven's point of view in the immediate aftermath, then from each of the perspectives of two women removed from the crime but not from its far-reaching reverberations. As Steven is shuffled among caretakers—including Phil, Gina's current boyfriend and a prime suspect—Shepard backgrounds the murder investigation, instead choosing to lay bare Steven's shock and grief in tight, precise terms ("He saw her face again. He felt as if he were standing at the edge of something high"), a strategy that continues throughout the novel. The second part takes place a year later, following schoolteacher Lily Chin, engaged to wealthy Nickolai Belov, as she's confronted by a woman who claims to have been Nickolai's lover—before pointing Lily to where Nickolai has hidden Gina's journal. In the third part, Shepard leaps ahead 10 more years to focus on 73-year-old Louise Carpanetti, suffering from terminal cancer and unsure what to do about her dependant, childlike 55-year-old son, Michael; when she reads about a break in the 12-year-old murder case, she must confront old doubts about her erratic son's involvement. Subtle and rewarding, Shepard's narrative unravels the mystery of Gina's murder obliquely, through her characters' layered relationships, leading to a conclusion that's satisfying, haunting and well deserved.