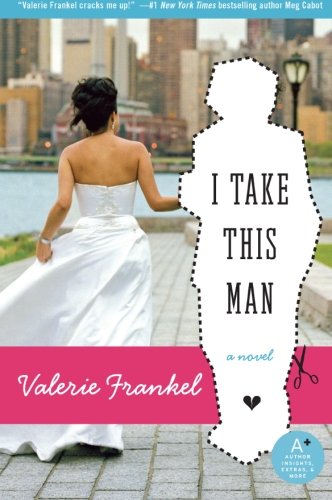 I Take This Man

Veteran chick lit and YA author Frankel ( ; ) delivers a kooky romp about a wedding gone very awry. Penny Bracket, a spoiled new-money Jersey girl, hates her $15,000 wedding dress, but loves her fiancé, Bram Shiraz. So when she receives an "I can't go through with it" note from Bram just before she's due to march down the aisle, she's upset. Penny's mother, Esther, couldn't be happier—Bram, she thought, never was right for Penny—but maternal rage takes over, and when she finds him packing his suitcase in his hotel room, she knocks him out with a champagne bottle and whisks his unconscious body to a hidden room in her mansion. While Penny tries to mend her broken heart by shopping with best friend Vita, Bram's father, Keith, gets hot on Esther's tail—er, trail—as he searches for Bram. Esther's attraction to Keith thaws her icy heart for the first time since the long-ago mysterious death of her cheating husband, Russell. Secrets are revealed, heads are cracked, and protection orders are issued as Keith realizes Esther kidnapped his son, and Penny learns the reason Bram left her. A too-swift and confusing climax gives way to a haltingly fluffy ending. Frankel's latest is clumsily over-the-top yet insubstantial.