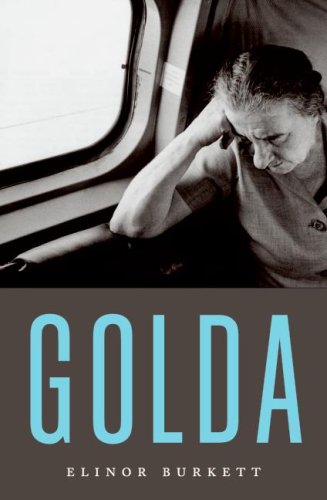 As Israel's prime minister from 1969 to 1974, Golda Meir (1898–1978) was recognized by her wrinkled face and gray bun. But, Burkett ( ) says in this sympathetic but balanced biography, the young Meir was so strikingly attractive that detractors grumbled she had slept her way up the political hierarchy. The rise of the Russian-born, Milwaukee-bred Golda Mabovitz, however, was due to her enormous popularity in the U.S. as a fund-raiser for a struggling Jewish settlement in pre-statehood Palestine. Meir was politicized by memories of poverty and anti-Semitism in czarist Russia and by a feisty, older sister who introduced her to socialist Zionism. A Zionist pioneer, Meir secretly negotiated with Jordan's King Abdullah before the U.N. vote to partition Palestine; became a fervent supporter of Soviet Jewry after her reluctant stint as Israel's first ambassador to Moscow; and hesitantly approved the assassination of Palestinian terrorists responsible for the massacre of Israeli athletes at the Munich Olympics. Burkett says the price of Meir's nonstop political life was rocky relationships with her children and estranged husband. This is a solidly researched, highly readable portrait of a mesmerizing but, according to Burkett, ultimately lonely woman, though much of the material is familiar. 8 pages of b&w photos.