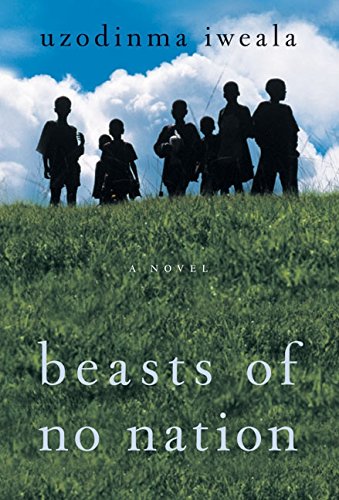 Beasts of No Nation

Iweala's visceral debut is unrelenting in its brutality and unremitting in its intensity. Agu, the precocious, gentle son of a village schoolteacher father and a Bible-reading mother, is dragooned into an unnamed West African nation's mad civil war—a slip of a boy forced, almost overnight, to shoulder a soldier's bloody burden. The preteen protagonist is molded into a fighting man by his demented guerrilla leader and, after witnessing his father's savage slaying, by an inchoate need to belong to some kind of family, no matter how depraved. He becomes a killer, gripped by a muddled sense of revenge as he butchers a mother and daughter when his ragtag unit raids a defenseless village; starved for both food and affection, he is sodomized by his commandant and rewarded with extra food scraps and a dry place to sleep. The subject of the 23-year-old novelist's story—Iweala is American born of Nigerian descent—is gripping enough. But even more stunning is the extraordinarily original voice with which this tale is told. The impressionistic narration by a boy constantly struggling to understand the incomprehensible is always breathless, often breathtaking and sometimes heartbreaking. Its odd singsong cadence and twisted use of tense take a few pages to get used to, but Iweala's electrifying prose soon enough propels a harrowing read.