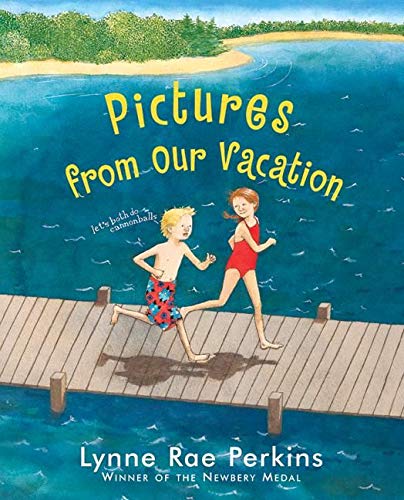 Pictures from Our Vacation

Newbery Medalist Perkins's latest picture book centers on a child's summer visit to her grandparents' farm, though drolly humorous moments throughout will ring familiar to anyone who has embarked on a family vacation. As they set out, the narrator's mother gives her and her brother instant cameras and notebooks to hold the photos they take. The sights from the car are hardly scintillating (“Once in a while there was a bridge or some cows”), but the narrator busies herself imagining an elaborate motel she'd like to own someday. Arriving at the farm, “Our dad saw happy memories everywhere he looked. All we could see was old furniture and dust.” A game of badminton with warped racquets is interrupted by rain that lingers for days. When at last the sun shines, the family, after one thwarted attempt, finally finds a place to swim—and then a storm strikes. Though Perkins seems to be setting readers up for a dramatic about-face in the narrator's attitude, the gaggle of extended family that descends for a relative's memorial service may strike some as too little too late. But for the narrator, this interlude is sufficiently rewarding that she doesn't feel the need to snap photos (“it's hard to take a picture of a story someone tells, or what it feels like when you're rolling down a hill or falling asleep in a house full of cousins and uncles and aunts”). In the warmhearted conclusion to this homespun tale, which Perkins has illustrated with brightly hued, detailed pen and ink and watercolor pictures, she wisely observes, “those kinds of pictures I can keep in my mind.” Ages 5-8.