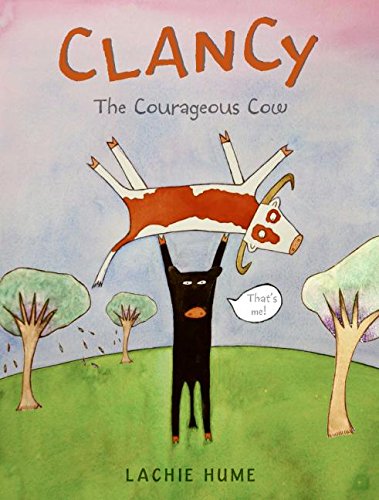 Australian newcomer Hume's wry naïve illustrations buoy this somewhat clunky story about a misfit cow, in which the explicit message about the importance of diversity overshadows the comedy. Clancy the cow is a "great disappointment for his parents. You see, they belonged to a herd of Belted Galloways, but Clancy had no belt. He was beltless." (Belted Galloways are black with a white band around the middle.) Clancy grows strong by slipping through the fence at night into the Herefords' lush field to graze (without a stripe, "he was invisible in the dark!"), and a subplot emerges in which Clancy falls in love with a "totally brown" Hereford named Helga ("Like Clancy, Helga had always been picked on because she was different"). In the pasture war between the herds, the Herefords have the upper hoof until Clancy wins the wrestling match and proclaims, "I say we pull down the fence and be cows together." Hume's illustrations of the cartoon cows are often amusing. As an outcast, Clancy tries various silly remedies: he paints on a white stripe, sprinkles on white sugar and even rolls in the snow. When Clancy is being trained to fight by some experienced wrestlers, the spread features different cow-appropriate wrestling holds (the Cud Cruncher, the Helicowpter, the Ruminator, etc.). These comic touches leaven the rather heavy-handed message. All ages.