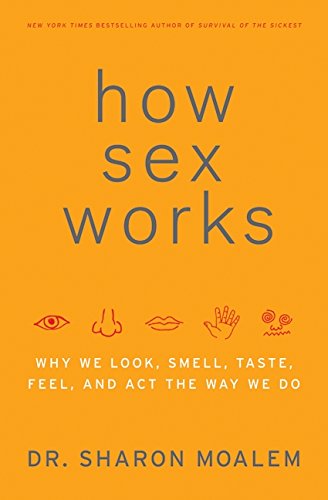 How Sex Works: Why We Look, Smell, Taste, Feel, and Act the Way We Do

Birds do it, bees do it, but why do humans do it? In this wide-ranging look at the evolutionary reasons for sex, physiologist and evolutionary biologist Moalem says that it's all about shuffling the gene pool and getting rid of any unwelcome guests, such as viruses, that may have latched onto human DNA. But why is one particular person attracted to another? Moalem relays the latest research showing that smell plays a very important role in attraction, and that even our genes may influence one's smell, and thus a person's desirability, to others. Scientists have found that women tend to be attracted to different types of men at different points in their ovulation cycles (dark and handsome hunks at their height; sensitive, care-giving types at other times). Moalem ( ) whizzes through his discussion of homosexuality, neglecting angles that would have added to the book, but readers will find thought-provoking material in his chapter on differences in sexual anatomy and on how chromosomes and body parts aren't always what we expect them to be. Moalem writes fluidly for the general reader, and when he necessarily goes into graphic detail, he does it gracefully.