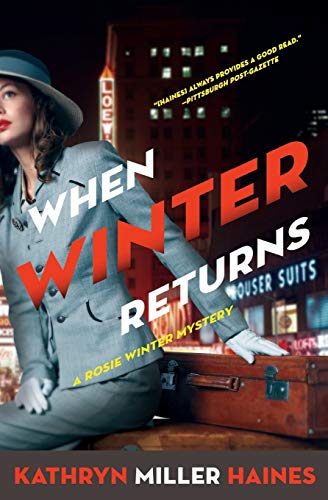 Set in the fall of 1943, Haines's captivating fourth Rosie Winter mystery (after 2009's ) finds Rosie and her best pal, Jayne Hamilton, back in New York after a harrowing South Pacific U.S.O. tour. First, they pay a call upstate on the parents of Jayne's late fiancé, Billy DeMille, who was killed in action two months earlier. To their surprise, they discover the Billy they knew stole the identity of the DeMilles' son, who died in the 1941 attack on Pearl Harbor. Back in Manhattan at the George Bernard Shaw Home for Women Pursuing Theatrical Vocations, Rosie must share rooms with her nemesis, Ruby Priest, and Jayne with weird Ann Fremont. At fake Billy's old digs, they uncover German letters written in disappearing ink and a stash of cash. To add to their woes, Jayne's ex-mobster honey, Tony, is causing trouble, and they can't land roles because another mobster has blackballed them. Haines vividly recreates WWII-era New York City, while daring Rosie never loses her “can do” attitude.