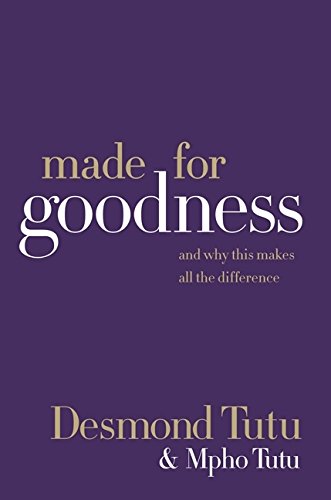 Made for Goodness: And Why This Makes All the Difference

Nobel Peace Prize–winner Desmond Tutu, who lived through South African apartheid and helped to clean up its criminal consequences by chairing the South African Truth and Reconciliation Commission, could write a grocery list and people would get something out of it. With his daughter Mpho, an Episcopal priest in Washington, D.C., the retired Anglican archbishop writes a relatively personal book about his fundamental, faith-based beliefs about human nature: people are basically good because they are made in God’s image. He maintains this in the face of the horrific events he has witnessed in his country and elsewhere, and he bases his belief in part on simple experiences throughout his life that have involved family and, significantly, his failures. Tutu’s humility is striking; he is comfortable in his own skin despite being raised in a culture that officially deemed his skin color second-class. This book is not nearly as dramatic or compelling as , based on his work with the Reconciliation Commission; on the other hand, it is heartening to know, or remember, that faith can be learned, reinforced, and expressed as much around the dinner table as in the public square. )