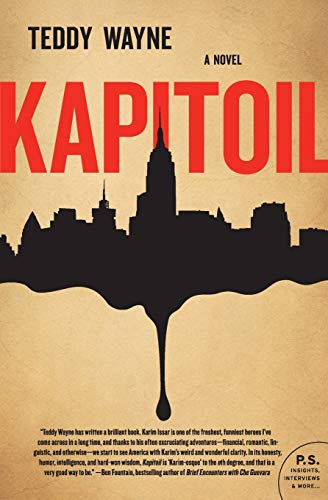 Magazine writer Wayne's strong and heartfelt debut novel, set in New York City in the months leading up to the millennium, follows Karim Issar as he leaves his home and family in Qatar for a programming job at a Wall Street firm preparing for the Y2K bug. On the side, the very socially maladapted programming genius creates Kapitoil, a morally troubling computer program that allows his company to make a killing by modeling oil futures based on political instability. Meanwhile, a romance simmers with Rebecca, Karim's colleague and his guide to American culture. Ultimately, Karim must make a choice about his and his family's financial security and Kapitoil's potential for (perhaps) doing good in the world. Wayne zips through a minefield of potential clichés and comes out unscathed, striking a balance of humor and keen insight that propels the story through Karim's education about the West's ethics and its capitalism, while in the background the World Trade Center looms. It's a slick first novel that beautifully captures a time that, in retrospect, seems tragically naïve.