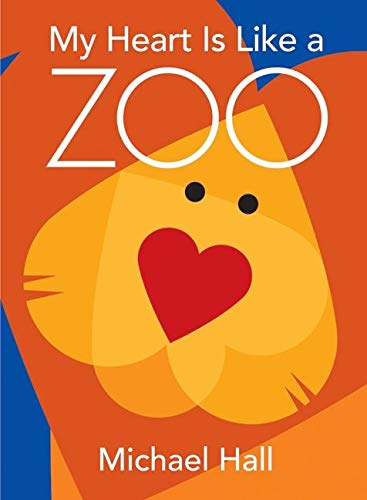 In his first book, Hall, a graphic designer, takes the idea of love being a many-splendored thing and runs with it straight to the animal kingdom. Using a heart shape as his core visual element, he creates a 20-member menagerie to illustrate the various facets of his affection: “My heart is like a zoo—/ eager as a beaver,/ steady as a yak,/ hopeful as a hungry heron fishing for a snack.” Not every poetic conceit works—there's a jarring quality to having one's heart described as “crafty as a fox” or “snappy as a crab”—and more sophisticated eyes may feel Hall could have used more variation in crafting his animals (the heart shape is used mostly as a head and some form of appendage). But children just learning about shapes will revel in these pages, thanks to Hall's masterful blending of bright, saturated colors, his posterlike compositions, and the sheer animal magnetism of the species he's chosen. Teachers will also find fodder for classroom activities when February rolls around. Up to age 5.