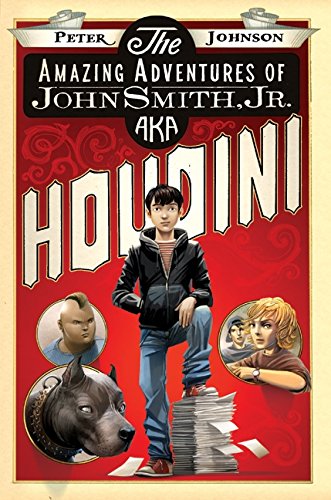 The Amazing Adventures of John Smith, Jr. aka Houdini

Johnson (Loserville) delivers a strong contemporary urban novel with cross-gender appeal, thanks to his likable, kind, and clear-eyed narrator, John Smith Jr. Nicknamed Houdini due to his obsession with the magician, the 13-year-old lives in Providence, R.I., in a neighborhood sandwiched between an affluent section and “the one people won’t walk through after midnight unless they have a bodyguard.” Presented in the guise of a novel that Houdini, inspired by a visiting author, is writing, the story traces the events of one autumn when Houdini’s beloved older brother, Franklin, is stationed in Iraq, and Houdini and two friends start a leaf-raking business. Houdini’s daily challenges—facing the local bully, befriending a scary Vietnam vet, fearing for Franklin’s safety—are set against a realistic background of urban decay, broken families, and impending job layoffs, but his humorous edge and the well-paced action create an easy tone. While the overly palatable ending falls short of credibility, Johnson offers solid insights into the varied well-drawn characters, and readers will appreciate Houdini’s realization that “writing makes you think very hard about things.” Ages 8–12. Agent: George Nicholson, Sterling Lord Literistic. (Feb.)
close
Details