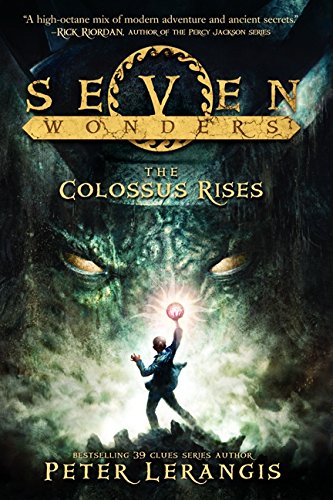 In this action-packed first novel in the Seven Wonders series, Jack McKinley, an imaginative kid with a penchant for Rube Goldberg–style devices, is kidnapped and brought to a mysterious island. There he learns that he and three other 13-year-olds carry a rare, often fatal gene; if they survive, the gene will confer superpowers on them and mark them as distantly descended from Atlantis. That ancient kingdom, they discover, was destroyed when its rulers misused the enormous power they wielded. Jack and his new friends have been recruited to rediscover the lost repositories of that power, which are connected to the wonders of the ancient world, such as the Colossus of Rhodes and the Lighthouse of Alexandria. Their survival, though, is far from guaranteed. Lerangis, contributor to the 39 Clues series, has created a real page-turner, and while the characters are somewhat one-dimensional (particularly the adults), there’s a genuine sense of mystery and even a touch of grandeur to this tale. Lerangis aims squarely at the legions of Percy Jackson fans and hits his target. Ages 8–12. Agent: George Nicholson, Sterling Lord Literistic. (Feb.)
close
Details