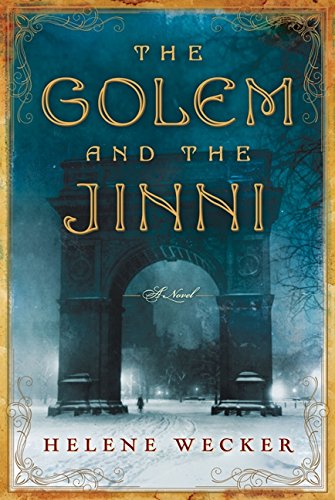 The Golem and the Jinni

Wecker's first novel is a magical tale of two mythical creatures—a golem from a Polish shtetl and a jinni from the Syrian Desert—struggling to fit in among New York's turn-of-the-19th-century immigrants. The golem is brought to America by poor furniture maker Otto Rotfeld, who had her built from clay to be his wife, but he dies en route. Elderly Rabbi Avram Meyer, recognizing the tall and hardworking young woman's supernatural character, gives her a name—Chava—and a job in a bakery, but ponders whether to destroy her or let her fulfill a destiny that legend dictates includes mayhem and destruction. Meanwhile, a tinsmith, Boutros Arbeely, releases the jinni from a thousand-year-old flask and names him Ahmad. Proud, handsome Ahmad proves a gifted metalworker, seduces a Fifth Avenue heiress, and pines for his long-lost glass palace before meeting Chava, his unlikely soul mate. Wecker deftly layers their story over those of the people they encounter, including a Jewish baker and his wife, a Maronite coffee shop owner and his wife, a doctor turned ice cream vendor, and an apostate social worker. The ending dips into melodrama, but the human touches more than compensate in Wecker's spellbinding blend of fantasy and historical fiction. Agent: Matt McGowan, Frances Goldin Literary Agency. (May)
close
Details