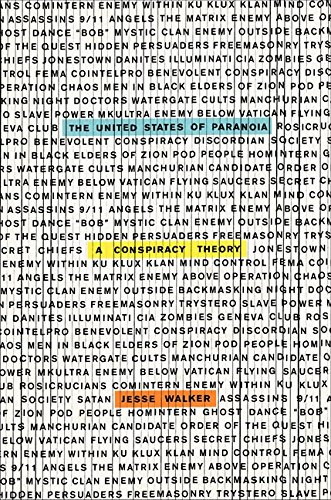 The United States of Paranoia: A Conspiracy Theory

Walker (Rebels on the Air) has clearly been taking notes as book editor for Reason magazine. Here he puts his journalistic and investigative skills to work in a superb analysis of American paranoia; fear of others and ourselves, he argues, has been a part of our national make-up since the country’s very inception. Walker smartly avoids taking sides—after all, “the world is filled with plots both petty and grand.” Instead, he corrals conspiracy theories into five stables: those dealing with the perceived enemy within (e.g., militia and hate groups); the enemy outside (e.g., al-Qaeda); the enemy above (e.g., the Illuminati); and the enemy below (e.g., the Occupy movement). The fifth category relates to theories of a so-called benevolent conspiracy, which assume that someone or something is working for the betterment of humanity. In some cases these categories overlap: Native Americans and colonists, for example, each viewed the other as the enemy outside. Walker’s means of attack are ingenious, and they allow him to make his points succinctly, often using popular films, like Rambo, to illustrate his points and add weight to his arguments. It all adds up to a terrific, measured, objective study of one of American culture’s most loaded topics. 18 b&w illus. (Sept.)
close
Details