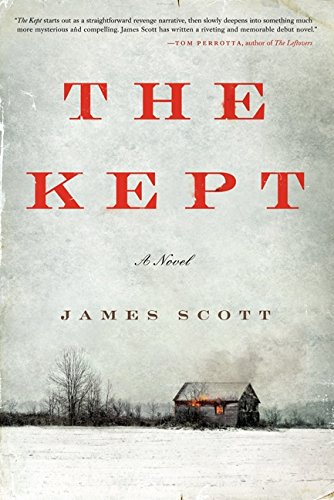 Scott’s accomplished debut—a dark, brooding tale set in upstate New York in the late 19th century—follows a compulsive midwife who must deal with the tragic consequences of her actions in order to form a family. As Elspeth Howell, mother of five, tromps through a blizzard to return home after weeks spent performing her duties, she finds a grisly bloodbath: her Native American husband, Jorah, and four children have been murdered. Only middle son Caleb, 12, survives. Startled while hiding in the pantry, the boy accidentally shoots his mother. Elspeth survives both this event and the flames that decimate the cabin after Caleb attempts to gruesomely burn the stacked bodies of his family members. The novel dips briskly back in time to reveal that Elspeth’s children were all abducted as infants from other households, since she is unable to conceive children of her own. The price of these crimes manifests itself in the tragedies she now faces. Elspeth and Caleb decide to track down the killers, and this expansive search, steeped in Elspeth’s need for revenge and Caleb’s search for his true lineage, expands the breadth of Scott’s novel and forces mother and son to adopt new identities in distant locales. Together, they face a host of angry villains, any of which could’ve been responsible for the executions. Scott has produced a work of historical fiction that is both atmospheric and memorable, suffused with dread and suspense right up to the last page. (Jan.)
close
Details