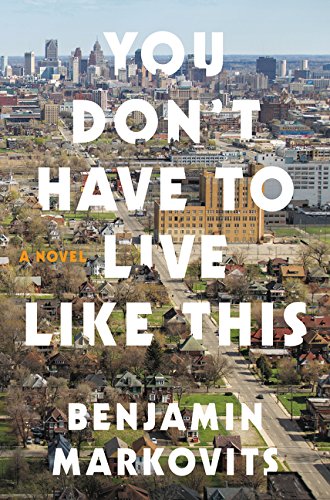 British writer Markovits (Imposture) takes on race, gentrification, and postrecession Detroit in his engrossing but somewhat thinly sketched seventh novel. Set in the years after the 2008 global financial collapse, the novel tells the story of Greg “Marny” Marnier, a 30-something Yale graduate and failed academic who, lacking better alternatives, follows his old classmate, a millionaire entrepreneur named Robert James, to Detroit, where James hopes to a revitalize several down-and-out neighborhoods according to what he calls the “Groupon model for gentrification.” New Jamestown (as the neighborhoods come to be known) attracts new tenants—a patchwork population that includes artists, writers, tech workers, and “Tea Party types” (according to the narrator) —but the influx of the (mostly white) newcomers vexes the area’s original inhabitants, in particular Nolan Smith, a local African-American artist and friend of Marny’s. Confrontations between Smith and Jamestown residents, along with other racially charged incidents, ensue, culminating in a trial and national media storm that for many readers will call to mind recent events in Ferguson, Mo., Staten Island, N.Y., and North Charleston, S.C., among others. The novel is a bit overcrowded and the prose sometimes too breezy, but Markovits writes boldly about some of our era’s most important—and most delicate—subjects. (July)
close
Details