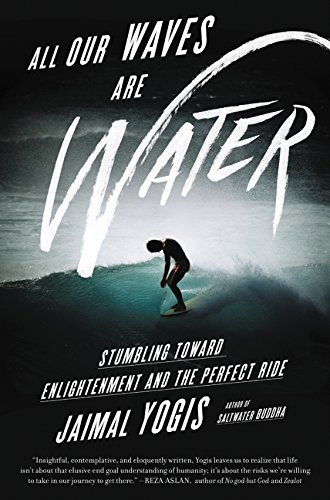 All Our Waves Are Water

Yogis, a surfer, journalist, and spiritual seeker, revisits and expands on the terrain of his previous memoir (Saltwater Buddha) in a quest that blends his search for surf and enlightenment in captivating ways. Descriptions of surf sessions in Indonesia, Mexico, and San Francisco are beautiful interludes. But the book’s power is in Yogis’s description of the seeking mind caught in its own currents—and occasionally transcending them—in places such as the Himalayas, a Franciscan friary in New York, and the Western Wall in Jerusalem. In this personal study on the elusive nature of mystical experience and its ability to evade the intellect, Yogis weaves together scientific research, the words of religious scholars and poets, and the wisdom of surfers and monks. From a Tibetan monk he learns how to reside in his own sadness and loss. Later, he discovers that even a “tropical beach in Mexico with a beautiful woman, nothing much to do except surf, be creative, meditate, and eat tacos” won’t bring him lasting peace. On Ocean Beach, he seeks balance between life as a journalist and his spiritual path. Yet Yogis finds wisdom everywhere. Yogis shows that the search for enlightenment, with its storms, lulls, and occasional thrills, is not much different from the search for the perfect wave. (July)
close
Details