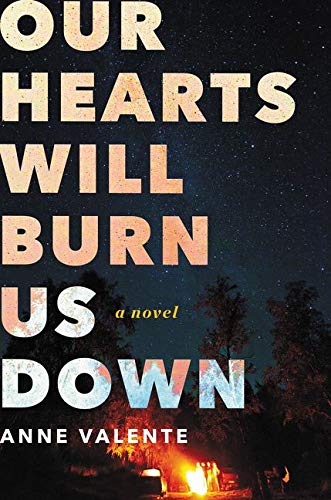 Our Hearts Will Burn Us Down

The specter of the shooting at Columbine High School in 1999 hangs over Valente’s haunting first novel. At Louis and Clark High School outside St. Louis, Mo., in 2003, a junior kills 28 students and seven faculty members in a shooting. Four of the survivors are juniors on the yearbook staff—Matt, Nick, Christina, and Zola—who spend the weeks after the tragedy trying to process the event. But that becomes impossible when, one after another, the houses belonging to the dead students’ families are burned down. Matt’s father, a police officer, works on the fire investigation but is hard-pressed for answers. The most confounding piece of evidence in every case is that the bodies of the family members appear to have been incinerated out of existence—a scientific impossibility. While Matt deals with his closeted lover, Tyler, Christina tries to care for her wounded boyfriend, Ryan, and Zola looks up at the stars for comfort, Nick turns to the Internet for answers as to what might have caused the fires. As these characters try to put their lives back together, the house fires continue, threatening to engulf the entire community. Written in the collective voice of the community, à la Jeffrey Eugenides’s The Virgin Suicides, Valente (By Light We Knew Our Names) artfully employs short chapters on arson and anatomy, as well as diagrams, newspaper articles, and biographies of the victims on the way to an unforgettable ending, with fire serving as a powerfully fitting metaphor for grief, loss, and our inability to comprehend the nature of fate. Agent: Kerry D’Agostino, Curtis Brown. (Oct.)
close
Details