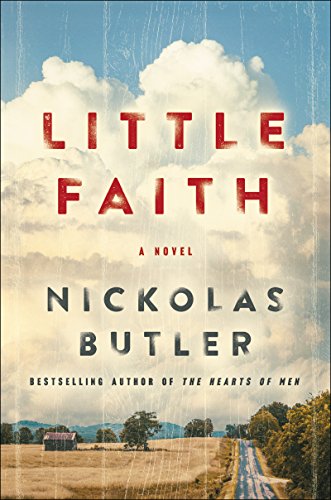 In Butler’s breathtaking yet devastating novel (following The Hearts of Men), a family is ripped apart and nearly destroyed when one of its own gets involved with a radical church. Set in a gorgeously rendered rural Wisconsin, the story unfolds over the course of a year, as 65-year-old Lyle and his wife, Peg, grow increasingly uneasy as they watch their once estranged adopted daughter, Shiloh, fall under the influence of—and eventually get engaged to—Steven, a charlatan disguised as a devout pastor and founder of the cultlike Coulee Lands Covenant. Their worry intensifies when Steven convinces Shiloh that Isaac, her six-year-old son from a previous relationship, is a faith healer and he uses Isaac’s “gift” to attract new parishioners and solicit donations for the church. At first, Lyle—who has grappled with the existence of God ever since his infant son died—tries to accept the situation so as not to alienate his daughter again. But when Isaac is diagnosed with diabetes, and the boys’ parents choose prayer instead of giving him access to medical treatment, even after he slips into a coma, Lyle intervenes. Butler weaves questions surrounding faith, regret, and whether it’s possible to love unconditionally into every page of this potent book. Secondary plots, including Lyle’s friend Hoot’s slow decline from cancer, Shiloh’s adoption story, and Peg and Lyle’s early courtship, are brief but equally resonant. This is storytelling at its finest. (Mar.)
close
Details