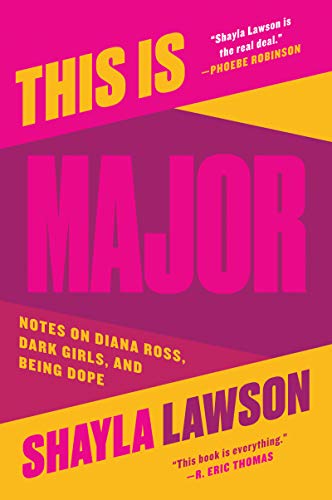 This is Major: Notes on Diana Ross, Dark Girls, and Being Dope

Poet Lawson (A Speed Education in Human Being), the director of creative writing at Amherst College, offers personal stories and cultural observations in this insightful collection of 17 essays about being a black woman in the U.S. In “American Girls,” Lawson, born in Minnesota in 1982, Lawson discusses living in an upscale neighborhood where kids made fun of her for sounding “suspiciously white.” In “For Colored Girls,” she writes of battling depression in her 20s, and how joining a high school production of Ntozake Shange’s For Colored Girls Who Have Considered Suicide / When the Rainbow Is Enuf helped ground her. She addresses the appropriation of black culture in “I Tried to Be Twitter Famous,” an illuminating take on the influence of “Black Twitter,” and in “Tammy From HR” she recalls her time working at an advertising agency selling “some palatable version of black cool” to white customers. Lawson’s lyrical sensibilities are on display in “You Are Here” and “& Just in Case You Forget Who I Am, I Am,” essays that honor Grace Jones and Anita Hill. Other topics include divorce and Tinder dating (“Cake Is Cancelled”) and racist portrayals in Disney movies (“Love Songs for Thots”). With sharp insight, Lawson elevates the discussion of race in America. [em](June) [/em]

This review has been updated to reflect changes that were made to the book after this review originally published.