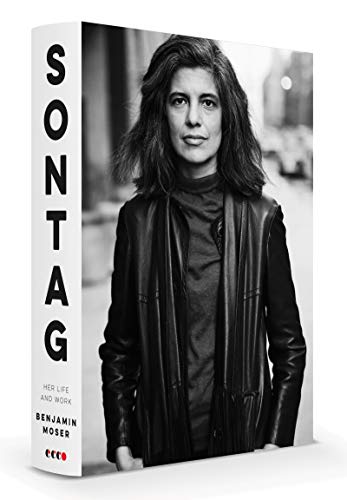 Sontag: Her Life and Work

In this doorstopper biography, Moser (Why This: A Biography of Clarice Lispector), for whom Susan Sontag was “America’s last great literary star,” exhaustively and sometimes exhaustingly chronicles his subject’s life. Between recounting Sontag’s birth to a prosperous Manhattan couple in 1933 and her death from cancer in 2004, Moser fully details her prolific career as an author of novels, plays, films, and, most notably, essays, including “Notes on ‘Camp’ ” the 1964 “essay that made her notorious.” He conveys the diverse range of subjects about which she wrote, encompassing photography, film, fascism, and pornography, among others. Moser follows Sontag’s private life as well—her troubled early marriage to Philip Rieff; her parenting of their son, David, whose job as her editor she later secured; her attraction to women, “of which she was deeply ashamed”; and her final long-term relationship, with photographer Annie Leibovitz. He does not neglect Sontag’s detractors, such as poet Adrienne Rich, who charged Sontag with inaccurately criticizing second-wave feminism. However, Moser’s tone is admiring: Sontag, “for almost fifty years... set the terms of the cultural debate in a way no intellectual had done before or has done since.” His book leaves readers with a sweeping, perhaps definitive portrait of an acclaimed author, though one likely to deter all but her most ardent admirers with its length. (Sept.)
close
Details