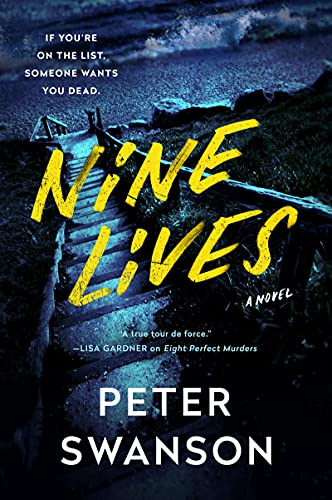 Swanson (Every Vow You Break) neatly riffs on Agatha Christie’s classic And Then There Were None in this taut thriller. Nine Americans from across the country—a stressed suburban father, an aspiring actor, a singer-songwriter, a resort owner, a retired businessman, a rich man’s mistress, an English professor, an oncology nurse, and FBI agent Jessica Winslow—each receives an envelope in the mail from an unknown sender containing only an identical list of nine names, including their own. The recipients, who don’t recognize the other names on the list, vary in their initial reactions; some are disturbed, while others barely pay attention to it. Then someone drowns one of the nine. Winslow, a federal investigator in Albany, N.Y., begins to probe whether the eight others, who have no apparent connections to one another, are all targets of a killer. Winslow’s mission becomes more urgent when another on the list is gunned down. Swanson makes the plotline plausible, despite radically transforming the setting from Christie’s isolated island with its closed circle of suspects, to the entire continental U.S. This is a well-crafted page-turner. Agent: Nat Sobel, Sobel Weber Assoc. (Mar.)
close
Details