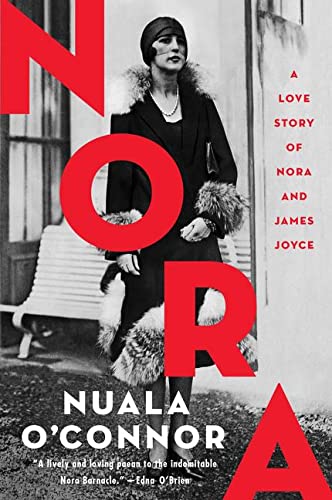 Nora: A Love Story of Nora and James Joyce

O’Connor (Becoming Belle) expands on her Granta award-winning short story, “Gooseen” in this poignant, comprehensive portrait of Nora Barnacle as a young woman, mother, and literary inspiration for the Molly Bloom character in Ulysses. Nora and James Joyce’s inseparable attachment begins in Dublin on June 16, 1904 (forever remembered as Bloomsday for the setting of Joyce’s masterpiece) and stretches to 1951. Narrated in Nora’s robust voice and carried by details saturated in filth, such as a walk along the Liffey river that “smells like a pisspot spilling its muck into the sea,” the narrative traces Nora and Joyce’s nomadic life from Ireland to Trieste, Zurich, London, Rome, and Paris, and details their constant money worries, health concerns, struggles with two difficult children, and emotional despair. Despite their personal and professional achievements, and a circle of friends that includes Sylvia Beach, the Guggenheim sisters, Samuel Beckett, Ezra Pound, and other literati, the couple suffers loneliness and “mutual melancholy.” An inscription on a bracelet that Joyce gives Nora underscores their commitment to one another: “love is unhappy when love is away.” O’Connor’s admirable accomplishment adds to the abundant Joyceana with a moving examination of an unforgettable family. (Jan.)
close
Details