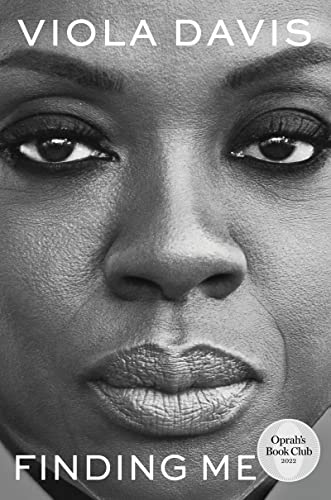 Finding Me: A Memoir

Tony and Oscar–winning actor Davis gives a master class in triumphing over poverty and despair in her soul-baring debut. Born in 1965, Davis became intimate with destitution, dysfunction, and abuse at a young age, growing up with an alcoholic father, and living off welfare checks in 1970s Central Falls, R.I. Inspired by the “true power of artistry” she watched Cicely Tyson display on TV, Davis took up acting, and, with the encouragement of an acting coach from a college prep program, won a scholarship to Rhode Island College. “Achieving became my idea of being alive,” Davis writes as she recounts honing her craft at Juilliard, before embarking on a trip to Gambia that transformed her and helped her celebrate her Blackness. Though her success didn’t come overnight, years of hard work led Davis to break out of the stereotypical “eye-rolling, ambiguous sidekick” roles that she bemoans Black women actors are often cast in, and win a 2014 Emmy at age 47 for her role in Shonda Rhimes’s How to Get Away with Murder. Even with her accomplishments, Davis is frank about the acting world’s shortcomings, where, she writes, “womanhood is defined by how ‘classically’ pretty you are... how close to white you are.” Davis’s grit and determination are moving, and her unflinching reckoning with the “racism and misogyny” she faced in Hollywood makes her story of overcoming all the more effective. Fans will be utterly enthralled. (Apr.)
close
Details