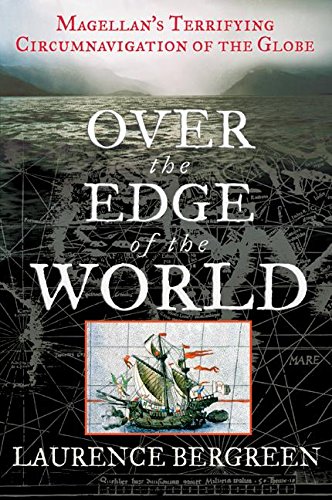 OVER THE EDGE OF THE WORLD: Magellan's Terrifying Circumnavigation of the Globe

Journalist Bergreen, who has penned biographies of James Agee, Louis Armstrong, Irving Berlin and Al Capone, superbly recreates Portuguese navigator Ferdinand Magellan's obsessive 16th-century quest, an ill-fated journey that altered Europe's perception of the planet: "It was a dream as old as the imagination: a voyage to the ends of the earth.... Mariners feared they could literally sail over the edge of the world." In 2001, Bergreen traveled the South American strait that bears Magellan's name, and he adds to that firsthand knowledge satellite images of Magellan's route plus international archival research. His day-by-day account incorporates the testimony of sailors, Francisco Albo's pilot's log and the eyewitness accounts of Venetian scholar Antonio Pigafetta, who was on the journey. Magellan's mission for Spain was to find a water route to the fabled Spice Islands, and in 1519, the Armada de Molucca (five ships and some 260 sailors) sailed into the pages of history. Many misfortunes befell the expedition, including the brutal killing of Magellan in the Philippines. Three years later, one weather-beaten ship, "a vessel of desolation and anguish," returned to Spain with a skeleton crew of 18, yet "what a story those few survivors had to tell—a tale of mutiny, of orgies on distant shores, and of the exploration of the entire globe," providing proof that the world was round. Illuminating the Age of Discovery, Bergreen writes this powerful tale of adventure with a strong presence and rich detail. Maps, 16-page color photo insert.