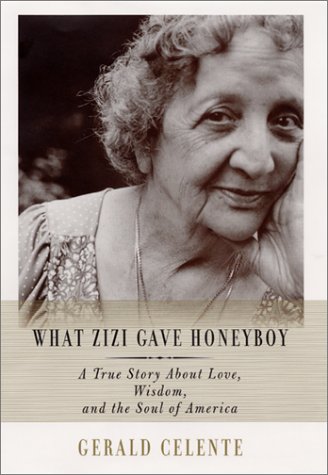 WHAT ZIZI GAVE HONEYBOY: Conversations with My Aunt About Love, Common Sense, and America's Promise

Zizi is an ailing but feisty 83-year-old Italian matriarch, widowed and living alone in Yonkers, N.Y. Honeyboy is her nickname for her nephew, author Celente, a divorced analyst who directs the Trends Research Institute. Here, Celente shares about 20 conversations that the two had in 1999 over home-cooked meals and Scrabble games at Zizi's kitchen table. (Recipes for Zizi's breaded chicken cutlets and anise cookies are included.) In the spirit of Mitch Albom's , this is a book in which a wise, spiritual older person offers heartfelt advice to an overworked baby boomer. However, while Albom freely shared his emotions, Celente generally responds with facts and figures. For example, when Celente complains about Zizi's lifelong cigarette habit, she jokingly asks if marijuana would be preferable. Celente curtly says that he used to smoke pot but doesn't anymore. Before Zizi can respond in what could have been a lively debate, Celente compares and contrasts the effects of smoking marijuana vs. tobacco, launching into a long, statistic-laden monologue. The book also contains a fair amount of politically incorrect observations made, ironically, by Celente and not Zizi (e.g., when Celente speaks of some of his acquaintances who won't hire a black acupuncturist, he says, "these guys aren't racists, that's just the way it is.") Not surprisingly, the book is at its strongest when Zizi talks and Celente listens. Her recollection of a near-death experience involving the entertainer Danny Thomas is both poignant and hilarious. This is a sweet—if at times frustrating—inspirational tome. B&w photos.