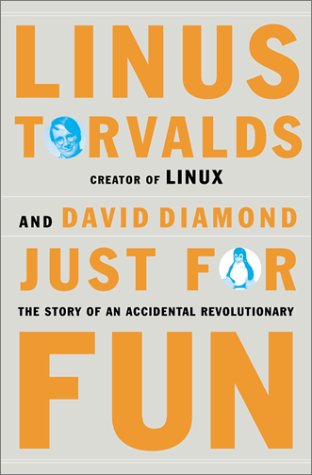 JUST FOR FUN: The Story of an Accidental Revolutionary

The autobiography of a career computer programmer, even an unorthodox one, may sound less than enthralling, but this breezy account of the life of Linux inventor Torvalds not only lives up to its insouciant title, it provides an incisive look into the still-raging debate over open source code. In his own words (interspersed with co-writer Diamond's tongue-in-cheek accounts of his interviews with the absentminded Torvalds), the programmer relates how it all started in 1981 with his grandfather back in Finland, who let him play around on a Vic 20 computer. At 11 years old, Torvalds was hooked on computers—especially on figuring out how they ran and on improving their operating systems. For years, Torvalds did little but program, upgrading his hardware every couple of years, attending school in a desultory fashion and generally letting the outside world float by unnoticed, until he eventually wrote his own operating system, Linux. In a radical move, he began sharing the code with fellow OS enthusiasts over the burgeoning Internet in the early 1990s, allowing others to contribute to and improve it, while he oversaw the process. Even though Torvalds is now a bigger star in the computer world than Bill Gates, and companies like IBM are running Linux on their servers, he has retained his innocence: the book is full of statements like "Open source makes sense" and "Greed is never good" that seem sincere. Leavened with an appealing, self-deprecating sense of humor and a generous perspective that few hardcore coders have, this is a refreshing read for geeks and the techno-obsessed.