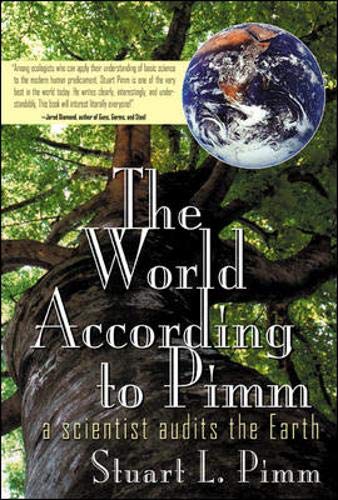 THE WORLD ACCORDING TO PIMM: A Scientist Audits the Earth

Calling himself "the investment banker of the global biological accounts," conservation biologist Pimm balances the raw numbers of what the earth produces against what humans take away annually, and, as an accountant might, quietly but insistently draws our attention to long-range projections. The numbers, he finds, do not quite add up. Pimm, who is a professor of conservation biology at Columbia University's Center for Environmental Research and Conservation and who publishes regularly in , and , is an advocate of conservation policy nationally and abroad, but he is not prone to moralizing. As he writes, "I will not hector you about having many children, driving a large car, eating meat," and yet he says that "the impacts I will describe already seriously degrade the lives of huge numbers of people." With clarity and humor, Pimm cites quantities, such as the one billion tons of plant growth human beings eat each year, the 35% of the oceans' continental shelf productivity they consume and the 60% of accessible freshwater runoff they utilize. Basing his argument on massive numbers like these, and on his own genial but forceful responses to them, Pimm makes a strong case for "ecology on a global scale." Readers reached by this book may just change their habits.