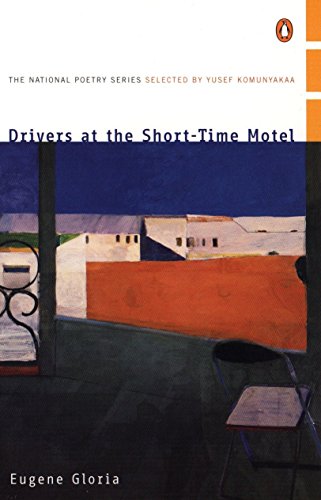 Drivers at the Short-Time Motel

The speaker in this debut volume poems, ""slowly forgetting.../ names for hands, breast, hair and river,"" has spent time in the Phillipines, and the bio confirms Gloria's birthplace as Manila. His brother (the poems tell us) served in Vietnam. What the poet has to say, in these 30 free-verse confrontations of bilingualism, ethnicity, migration, social class and daily life in the archipelago will hold readers' interest, but many of the poems, while well-constructed, won't exceed family-poem genre expectations: ""Milkfish"" waxes sad about local cuisine and ""sepia-brown photographs"" of the author's mother. Another poem says that the poet and his brother ""will not speak of wars inside us""; ""White Flower"" invokes an immigrant husband and ""the story he unearths/ from the wilderness within."" The second half of this short book is largely given over to such poems of protest, nostalgia and memory. There, the hulks of wrecked American cars, Filipino jeepneys and other motorized transport create a thread of symbols that gives the poems added lift. And Gloria's offbeat, off-kilter, often wonderful phrasings show an inventive consciousness at work: when the sun rises ""the giant O assumes a skin of margarine""; of ""Mauricio,"" Gloria writes that ""From Mobil Gas he emerges/ like a Mack truck from the desert horizon."" An uneven poem about the poet's father yields the pleasing, entirely unanticipated sentence ""My lord of facts luxuriates/ in mundane purchases at Napa Auto Parts."" The best bits of Gloria can recall August Kleinzahler, or Yusef Komunyakaa, who selected the volume for the National Poetry Series. If the book as a whole fails to live up to the strange, individual standards set by the best three or four poems here, readers will nevertheless trust the consciously accessible, pathos-driven poet who declares, ""If there were two worlds we are made to inhabit/ I would prefer the one I was forced to leave."" (June)
close
Details