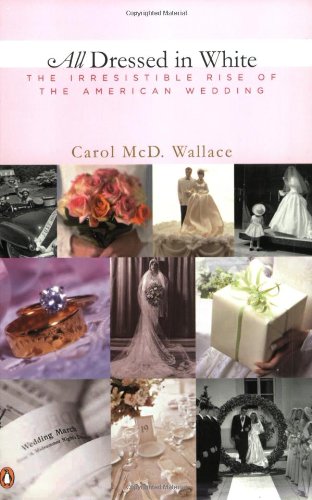 ALL DRESSED IN WHITE: The Irresistible Rise of the American Wedding

So much that the bride-to-be takes for granted today—the expensive white dress, multi-tiered cake, sit-down dinner, open bar, live band—would have shocked the bride of yesteryear. In the early 19th century, weddings were private affairs, usually held at home. Food, if there was any, was prepared by the mother or the bride; extravagant wedding gifts from friends were unheard of; and brides chose dresses that could be re-worn. In this history of 150 years of the American wedding, Wallace (co-author of and ) focuses on the pageantry to show how the now-expected princess-for-a-day event grew to be the norm. "The story of the white wedding in America," she writes, "has... been a story of assimilation and standardization." Wallace demonstrates how social mores, technological advancements and plain old crass commercialism (in the late 1920s, "businesses began to regard brides as potential profit centers") have transformed weddings, often taking them to ridiculous heights (remember the "brocade jackets with velvet lapels" and "shirtfronts exploding into ruffles" of the 1970s groom?). Using examples ranging from simple war-time ceremonies to Toni Braxton's 2002 Tiffany & Co.–themed wedding, Wallace details such intricacies as the lace on the gown or the choosing of bridal colors and attendants (but she barely mentions the ceremony's religious aspects or the events surrounding the wedding). This exploration of traditions and their metamorphosis will amuse and enlighten not just brides, but anyone who's been beleaguered by tedious champagne toasts and dry wedding cake. Photos.