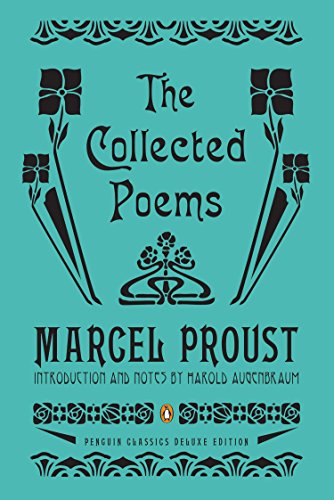 Even passionate readers of Proust’s Remembrance of Things Past may not know that the master also wrote verse. Left in manuscripts, enclosed in letters, or published along with his earliest prose, these 104 poems were not collected in their original French until 1982, and most appear here in English (with French en face) for the first time. The earliest, from the 1880s and 1890s, are florid, delightfully shocking declarations of same-sex lust; the latest, addressed to friends and confidantes (including Proust’s housekeeper Celeste Albaret), speak of the webs of shared tastes and crying emotional needs that also connect the characters of the novel. Yet Proust was not a poet by vocation: his later poems seem confined to their occasions, or awkwardly put in their earnest translations: “Tonight I feel that one longs to slumber./ Yet—my dear friend—Louisa’s a hot number.” Others are clearly fragments, or poke fun at now-obscure targets, or depend entirely on alert editors’ annotations, packed as they are with proper nouns: “O you who know the Virgin of Avila,/ Reynaldo Hahn!! better than... than... than the milk of Mamilla!” Augenbraum offers a clear introduction and notes, while eminent Americans (Lydia Davis, Wayne Koestenbaum, Rosanna Warren) contribute translations. Richard Howard does an especially stellar job with Proust’s tributes to painters, his most serious freestanding poems: in “Antoine Watteau,” “What’s vague is tender now, what’s near, remote.” The volume deserves attention because it shows a nearly unknown side of Proust, though it may seem like grace notes amid the symphonic greatness of Proust’s prose work. (Apr.)
close
Details