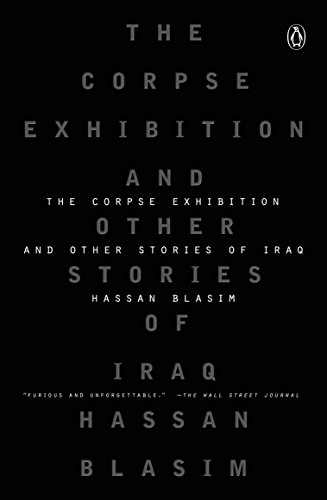 The Corpse Exhibition: And Other Stories of Iraq

Iraq came into our recent consciousness through war, supplanting the magic carpets and genies of folk tales, but Blasim, a filmmaker, poet, and fiction writer, who, persecuted under Saddam Hussein, fled Baghdad in 1998, destroys all preconceptions about his homeland and the effects of dictatorship, war, and occupation in this stunningly powerful collection. The stories are brutal, vulgar, imaginative, and unerringly captivating. In the title story, a man is interviewed for a job as an assassin, with the caveat that he’s expected to display the corpses of his victims in artistic and interesting ways. In “The Killers and the Compass,” a young boy follows his elder “giant brother,” Abu Hadid, around their “sodden neighborhood” of muddy lanes as he terrorizes the neighbors and extorts favors. The corpse of a journalist tells his story in “An Army Newspaper”: “There’s no need to kick him in the balls for him to tell the story honestly and impartially, because the dead are usually honest, even the bastards among them.” The surreal continues in “The Madman of Freedom Square,” in which the statues of “the blonds,” two young men who had mysteriously appeared in the wretched Baghdad neighborhood called the Darkness District and transformed the inhabitants’ lives, are threatened with destruction by the new government’s army. Daniel is “The Iraqi Christ” and has premonitions: “A constant itching in Daniel’s crotch foretold that an American helicopter would crash...” Cars explode, women and boys are beaten and raped, bodies are inhabited by spirits, refugees tell lies, yet none of the horror is gratuitous; every story ends with a shock, and none of them falter. A searing, original portrait of Iraq and the universal fallout of war. (Feb.)
close
Details