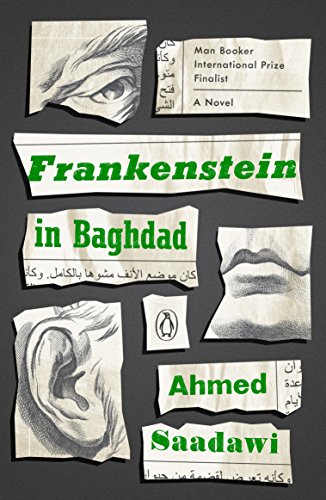 Saadawi’s novel begins with an intriguing question: “Have you seen a naked corpse walking down the street?” So asks Hadi, a local junk collector in Baghdad during the American invasion and dreadful, subsequent war. At least at first, his neighbors appear unconcerned because “Hadi was a liar and everyone knew it.” However, in the wake of suicide bombings and other brutal acts of violence, Hadi has been collecting body parts, just has he has always collected other bits of this and that. Saving the limbs and hunks of flesh, Hadi stitches a kind of body back together, claiming, “I made it complete so it wouldn’t be treated like trash, so it would be respected like other dead people and given a proper burial.” Unfortunately, “Whatsitsname,” as Hadi comes to call his creation, becomes sentient, his spirit revived by an old woman who has been mourning her own son for 20 years, even since he was killed during the previous American war. And the monster becomes just that, a violent, terrifying murderer who, like the war itself, takes on a life its own, beyond logic, reason, or control. While the Frankenstein through line doesn’t quite hold Saadawi’s novel together, the book is successful as a portrait of a neighborhood, and a way of life, under siege. When a local real estate agent named Faraj is questioned by Americans on the morning after Whatsitsname commits a particularly grisly murder, he considers the troops who have come to occupy his country. “As suddenly as the wind could shift, they could throw you in a dark hole.” This is a harrowing and affecting look at the day-to-day life of war-torn Iraq. (Jan.)
close
Details