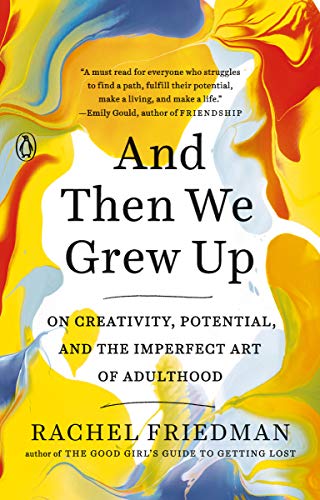 And Then We Grew Up: On Creativity, Potential, and the Imperfect Art of Adulthood

Friedman (The Good Girl’s Guide to Getting Lost) ponders the creative impulse in this insightful work. Starting at eight years old, Friedman attended summer camp at Interlochen Center for the Arts, a prestigious Michigan camp and school for young artists of all kinds, and was certain she’d have a career as a professional violist. But after a miserable year as a college music major, she decided to chart a new course. More than a decade later, a divorce and career anxieties as a freelance writer caused Friedman to wonder what her life would look like if she’d stuck with the viola. To dig deeper into concepts of potential, ambition, and art generally, Friedman reconnects with old friends from Interlochen. Including profiles of artists and former art students such as Jenna, who channeled her skills as a violinist into teaching music, and Dalia, who struggles to fit drawing and other artistic pursuits around her office job, Friedman ably illustrates many forms creativity can take. Friedman argues that there is both a “productivity-infused creativity” as well as creativity concerned with making everyday choices, such as choosing what one wears, eats, and reads. Anyone who’s ever looked back longingly at an old passion and wondered what might have been will find an empathetic friend in Friedman. (Dec.)