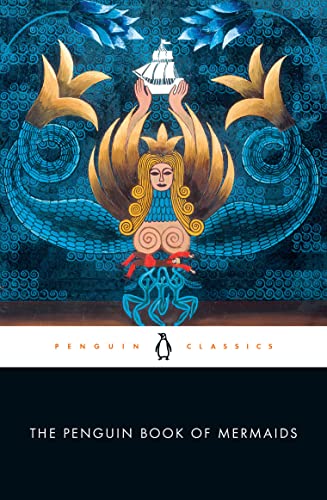 The Penguin Book of Mermaids

Reviewed by Sonya Taaffe The desires and dangers of the shape-changing sea have rarely been so intelligently and inclusively showcased as in this accessible yet rigorous, passionately diverse, and thoroughly spellbinding anthology of water spirits from around the world. Despite the title, these 63 tales, selected by Bacchilega (Fairy Tales Transformed?) and Brown (Facing the Spears of Change), come from the literary and oral traditions of dozens of cultures, from antiquity to the present day, and do not confine themselves to variations on the seductive fish-tailed woman of European tradition. The dense, enlightening introduction draws out the multivalent ambiguities of this familiar figure and then explicitly decenters it in favor of exploring the wealth of narratives through which humans interact with the waters—oceans, lakes, rivers, all manner of liminal shores—of our world. The ancient world is represented by the Naga Kāliya of the Sanskrit Puranas and the Tahitian eel-king Fa’arava’ai-anu as well as Homeric Greek sirens. Contemporary accounts range from northern Australia to the heel of Italy. No body of water seems without its particular inhabitants: the East Khasi Hills, the Nicobar Islands, the Persian Gulf, and the Lower Amazon are only a few of the sources for these yearning, cautionary, respectful, or humorous tales. Indigenous stories, as of the powerful reptilian mo‘o of Hawaii, the fish-bringing Pincoy and Pincoya of the Chilean Chiloé Archipelago, and the horned serpents and snake-maids found across Native North America, especially shine. The editors also cleverly include Kurahashi Yumiko’s “A Mermaid’s Tears” and Genevieve Valentine’s “Abyssus Abyssum Invocat,” two short literary fictions that practice their own provocative shape-shifting on Hans Christian Andersen’s “The Little Mermaid.” Questions of boundaries, otherness, and interrelation recur throughout, but the editors are careful neither to collapse different kinds of mermaid into flat typologies nor to set them artificially apart. Selkies may be Scottish or Irish. The African diaspora has room for the Caribbean Mami Wata and Yemoja of the Yoruba. The Philippines host both colonial sirenas and indigenous litao. As the editors acknowledge, it is impossible for one volume to represent the totality of the human experience of mermaids and other water spirits, but the limits on this book are ones of word count, not imagination. Many of its most striking selections appear here for the first time in English. The insightful story notes, generous attributions, and tantalizing bibliography are the opposite of gatekeeping. No matter which coast you may call home—or perhaps especially if you live landlocked—the songs these sirens sing are many-voiced, irresistible, and essential. (Oct.) Sonya Taaffe’s Lambda-nominated collection of queer and sea-themed fiction, Forget the Sleepless Shores, was published by Lethe Press in 2018.
close
Details